The DC Scout Snowboard Boot Is A Beginner To Intermediate Snowboard Boot That Is Built For All Mountain, And Free Ride Snowboarders. They Rate A 6/10 On The Stiffness Scale, Which Means They Have More Give Than A DC Judge Or A Shuksan Model.

To give a little background on me; I’m an avid snowboarder, and hit the hills up 3-5 times a week and I visit the mountains at least twice a year.

BOA Snowboard Boots Were Developed In 2001 As An Alternative To Traditional Laces. They Are Made From Wire Laces That Attach To A Spool On The Boot. To Tighten You Turn The Spool And To Loosen You’ll Pull The Spool Out. This System Makes It Faster To Lace Up.

Something I’ve noticed recently in the design of the Scouts is that DC moved from a Dual Boa System to a single one. I believe mine are a 2017 version and I still have duals on them.

However the newer models only have 1. Personally I’m a fan of dual boas, so that alone would make me look at Judges or the Shuksan from DC. Both of which are stiffer than the Scouts anyway.

However if you’re newer to snowboarding, and you’re looking for a good starter boot. It probably won’t even affect your riding performance.

On the newer models it looks like they’ve reduced a lot of pinch points, and this was the reason they added the second Boa in the past. The technology is constantly evolving, and I haven’t seen anything negative online, but I always recommend that you try them on prior to purchase.

Keep in mind there is a break in period for any snowboard boot, and the DC scout boot is no exception. I always recommend bringing your old boots with you to the hill, or making a shorter day of it. Especially the first couple of times you ride. This way you have a backup, and you won’t kill your feet.

These ratings are from my own personal experience, yours might differ a little bit, but I feel the 4 topics above are the best way to rank boots. Stiffness isn’t a part of the scale, because that’s subjective to where you’re wanting to ride.

I gave these a 4.5 because I’ve never had a pair of DC boots that felt horrible on my feet. I can say the same things for skate shoes. Make sure you try them on, and walk around a bit in them. They should be tight but not painful, and there is a break in period for them as well.

I always expect my snowboarding boots to last me around 3-5 years. The DC Scouts I’m currently riding in will be 3 years old this season. With riding 45+ times a year they wear out quickly, but if you ride less there’s no reason you should get 5 years out of them.

At the end of the 2nd year of riding I always have to replace the BOA wire on my right boot. This is due to a bad habit of resting the snowboard on that foot while riding the chairlift.

I’ve never replaced a left boot wire, so if you avoid my bad habit you might never have to replace them.

***Side Note Boa Offers Free Lifetime Replacement Parts. All You Need To Do Is Order The Kit Online And You Can Replace Broken Wires/Spools At Home In 10-15 Minutes***

DC Scout – What Terrain Should You Ride On?

You could ride these anywhere, spend the morning in the park, and the afternoon shredding the trees. These boots will handle anything you can throw at them. I’ve been an all mountain rider who recently started doing some freestyle, and the transition is simple. The control is there, and it’s mostly not an issue.

On rails or boxes it could become an issue depending on your board setup and skill level. The boots are stiffer then I’d recommend for beginners, and that means less unforgiving.

It’s more of a personal preference, but I tell people to wear a softer boot when riding rails or boxes.

This isn’t something that should stop you from hitting a feature, just be aware of it. Test them out a couple of times to get the feel before you hit it hard.

What Size DC Scouts Should I Wear?

I feel that DC Snowboarding boots will run a tiny bit smaller than normal, but I think that’s a good thing. I wear a size 11 shoe, but I wear a size 10 boot.

The boots also pack out by half a size. (Packing out is another term for stretching) After a hard season of riding, your boots might be half a size to a full size larger. It’s better to have them a little to tight at the start. Just don’t overdo it.

These boots are rated at a 6/10 on the flex scale. 1 is the softest while 10 is the hardest. This gives them an average flex, and makes them excellent for all mountain or freestyle riding. These boots will work well if you’re an advanced rider, or a novice.

All Boas come with a life time guarantee click here for more information and to order your own replacement kit. I’ve actually used this warrantee, and only paid a dollar to ship the replacement parts. They don’t replace the boot, instead they send a repair kit for the Boas and it’s quick and easy.

Usually the repair kit will contain the wire, the crank, and a tool that you can use to take things apart. There’s also instructions involved which makes it extremely easy.

I Would Highly Recommend these boots, they’ve served me well and in the next year or two I’m going to purchase a new pair.

If you’re in the market for some snowboarding boots Amazon has some great deals. I’ve placed some links below for you to check out. Don’t forget to comment your thoughts and subscribe below.

Check Out Some Of The Latest Deals From Amazon Below: 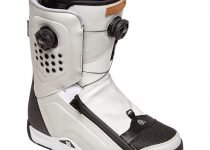