Snowboarding in Minnesota isn’t the first thing that runs through a persons mind when they hear Minneapolis, or Minnesota. In fact most of the time they’ll hear that annoying accent we all tend to have.

I’m born and raised in Minneapolis, and we gotta make do with what we got. While we don’t have any mountains in Minnesota, we do have some epic hills, good beer, and some awesome people.

All of these things combine into an awesome experience when snowboarding in Minnesota.

Also, we have an average snowfall of 54″ and while that may seem like a small amount, the resorts are able to make a lot of snow quickly, its big business here.

So without further ado, here are my top 10 favorites resorts for snowboarding in Minnesota.

Afton Alps is one of my favorite places to ride in the twin cites. I live in the western suburbs and it takes about 45 minutes for me to drive there.

While Buck Hill (Next Section) is closer, Afton has a few more runs, is more expensive, but is also owned by Vail Resorts. Every year I buy a season pass and go out west hitting up as many Vail Resorts as possible.

While I’m home, I ride Afton, and all for the cost of a season pass.

In addition to that, Afton has the most runs/terrain in the twin cities area. There’s also a good mix of beginner to intermediate runs. It’s one of my favorite places to ride.

Check out my full review of Afton Alps Here.

While Afton is my favorite, Buck Hill is a close second. It’s only 15-20 minutes south of Minneapolis and is cheaper than Afton.

The terrain park is pretty solid, and they’ve got runs for beginners to advanced snowboarders (as advanced as it can be in Minnesota).

I like buck because they have a Sunday night deal. Last season they charged $10 for the last 3 hours they were open.

The food and bars there are pretty cool, you’re just down the road from the Zombie BoardShop. I used to make fun of Buck a lot, because it looks really tiny from the highway.

However I’ve taught there enough times to realize that it’s bigger than it seems, and you can really have some fun there.

The terrain parks are decent, and they have a small half pipe on the southern side of the resort.

Probably one of the larger ski resorts in the Midwest, Lutsen is definitely the biggest in Minnesota (Giants Ridge And Afton Are Close Seconds).

I’ve been shredding at Lutsen for years, it has 4 different “Mountains”. All of which have an epic view of Lake Superior (maybe not the beginner mountain),

My favorite mountain there is moose mountain, eagle has some good runs as well but Moose holds a special place in my heart. On as side note, it is one of the first places I actually hurt myself on a snowboard. (and yes it was epic)

Recently they’ve added some resort upgrades including a high speed chair lift, and a brand new Gondola. Last time I visited, there was never a line.

There’s a bunch of amazing restaurants on site (and bars), but if you didn’t wanna stay at the resort you can go 20 minutes north.

Here is the small town of Grand Marias, and you’ll find amazing pizza and some awesome bars here as well. Grab a Castle Danger beer…

I’ve always wanted to visit Giants Ridge when I’m out snowboarding in Minnesota. Unfortunately I don’t get the opportunity to visit here that often.

Last time I was there standing on the mountain summit, I had to stop and catch my breath. There were birch trees as far as I could see, all around me.

The terrain park at Giants Ridge was pretty awesome, I can’t give a full review of that, because I got a concussion there being stupid, but that means it was pretty epic.

All around I had a good time exploring that resort, and I plan on returning sometime in the future.

For More Information, Check Out My Review Of this Resort Here.

Wild Mountain: Make Sure You Hit The Wall

At Wild Mountain they have an amazing run called the wall. By Minnesota standards this thing is steep, and kinda long. So of course it scares a lot of people. Just remember to keep your speed up when you’re on the way to drop into it, a lot of people get stuck because there’s a slight incline on the way there.

In addition to that, wild mountain has an awesome old ski hill feel to it. Of course I mean this in the best way, but I always feel like I’m at an old ski resort town when I’m there.

If you have the opportunity, they have lift ticket deals on the weekends in the evening, and it’s a fun place to drop in and play around.

Hyland Hills: An Epic Terrain Park For Snowboarding In Minnesota.

Hyland Hills is where I learned to snowboard, and they ALWAYS have an epic terrain park. While it’s one of the smallest resorts in the state, their terrain park is always top notch.

I don’t know how they do it, it’s just awesome all year round. The only terrain park I like better is the one at Trollhaugen. However you won’t hear much about that resort as it’s in Wisconsin, feel free to click the link above to see my in depth review.

Hyland hills is a great training ground, and an excellent place to improve your skills. If you’re not a park rat like me, it can be a bit harder to get into riding there. However if you have a group of friends, all bets are off. The place can get fun really quick.

Welch Village: Some Of The Steepest Runs In The State

Welch Village is a bit farther away than Afton, but if you hit it on the right day, it’ll be amazing.

On The Weekends they have a “Back Bowl” opened up, and it’s an amazing place to ride.

It’s got steep runs, good powder (usually) and signs that scare the beginners away. The back bowl has 1 run in and 1 run out, and it’s own chair. Everything is rated as a black diamond.

Don’t get me wrong, I love the rest of Welch, it’s a solid resort, but the back bowl is where it’s at there. In seasons past they would make giant mounds of snow in the middle of the runs, and we’d just get to play on them as we rode down.

I miss riding at Welch.

They also have some of the steepest runs in the state. They have Chicken, Dan’s Dive, And a couple others that’ll give you a nice rush of adrenaline.

Check out my review of Welch Village Here For More Infomation.

Spirit Mountain: It Starts With A Well Maintained Half Pipe

I’m a University Of Minnesota graduate, and when I was there we could buy discounted passes to Spirit Mountain for around $30. As a poor college student, I loved it.

UMD students were 10-15 minutes away but my buddies and I were 3 hours away. Either way it worked in our heads…somehow.

Spirit has the biggest and most well maintained half pipe in Minnesota, it’s pretty impressive to look at. While there are a lot of other runs, this particular aspect of the resort is their defining one.

The reason I say that is Lutsen is an hour north, and Giants ridge is 1-2 hours west, and they do the crazy riding a little better. However if you’re going to be there, hit up the parks, explore the runs. It’ll take a bit of time for you to explore everywhere.

Mount Kato; A bit Of A Drive, but A Lot of Character

Back in the day Mount Kato and Afton were owned and operated by the same family. If I remember correctly, Mount Kato Is still owned by the founding family, and they sold Afton to Vail Resorts a few years back. (I could be wrong, I’m a snowboarder not a historian)

While this resort is 2 1/2 hours south of the cities, I kind like it. Snowboarding in Minnesota isn’t complete until you ride here. They have local legends, (Kato Gators) and some epic runs. While the resort is somewhat small, it has a lot of heart and character.

For Apres, they have one of my favorite bars, and really good food.

Powder Ridge; Where’d This Hill Even Come From?

One thing you’ll notice heading west out of the cities, is how flat things get in Minnesota. The last thing you’ll expect to find is a ski resort over an hour away, yet somehow Powder Ridge Exists.

The first time I drove to this resort, I thought I’d driven the wrong way, and all of a sudden this gian mound rises out of the plain.

Nobody can explain it, the hill is just there, and it’s used for shredding.

Like buck, I used to make fun of Powder ridge, but I’ve changed my tune. It’s actually a fun and tiny hill. Especially if you’re training some 3rd graders like I usually do.

It’s got a number of terrain parks, some black diamonds, and an epic selection of donuts…always try the donuts.

To Learn More About Powder Ride Check Out My In Depth Review On It.

Since this is a list of “places in Minnesota” I can’t jusify adding Trollhaugen to the list. My reason, it’s on the wrong side of the river, in Wisconsin.

It’s 1 1/2 hours from the city, and has an epic terrain park (mentioned above a couple of times). In addition to that, I believe it has some of the coolest atmosphere for resorts. On Friday nights they have live music, and sometimes shots and brats on the hill.

It’s pretty awesome, and they have an awesome lift ticket deal on Friday nights too. Last year it was $20 for 9PM to 3AM…

I hope you liked my latest post. It’s almost the start of the season and I’m getting excited. have a great day and happy shredding. 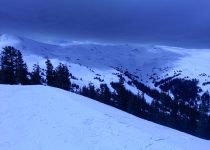